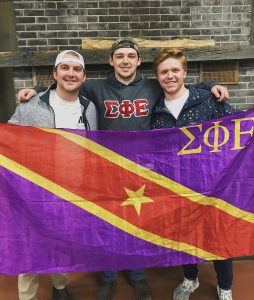 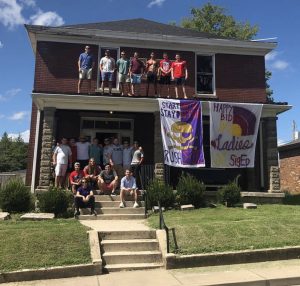 Sigma Phi Epsilon was founded in 1901 on the campus of Richmond College (now called the University of Richmond) in Richmond, Va. The story of its founding by 12 determined men set the stage for the growth and success of one of the country’s premier fraternal organizations. The history of the Fraternity reflects the times, through great wars and profound cultural shifts. Throughout the decades, the men of Sigma Phi Epsilon have practiced their values and embraced the stated desire of the Founders, “This Fraternity will be different.”

Today the University of Richmond campus features the Sigma Phi Epsilon Founders Walk (pictured below). The Founders Walk connects the Carole Weinstein International Center to Jepson Hall and the heart of the academic quadrangle. On the path sits a bronze plaque, listing the names of the 12 men who started what would become one of the nation’s largest and most accomplished fraternities.

"This Fraternity Will Be Different." - Carter Ashton Jenkens | "This fraternity changed my life in so many positive ways. I'm forever grateful for the decision to become a member of Sigma Phi Epsilon" - Zac Gillman | "SigEp was a huge reason I stayed in college. It was and is a huge influence in my life. Being a founding father of the chapter, and just as much, serving as president will always be a top shelf honor in my life. " - Jason Choate | "I made a decision over 13 years ago that changed my life forever. It has helped me focus in the worst times of my life. It has been my foundation in the best times of my life. I have laid my big brother Twitch down to rest. I have laid my brother Keith down to rest. But these two men, along with many other of my brothers have raised me higher than I ever thought I could achieve! I hope one day my two sons have the honor of joining me in this brotherhood. Way down by the river.... you'll find some men eating hamburgers and French fries. These are some of the greatest men I have ever known! I'm damn proud to be a SigEp!" - Paul Braddy | "Building Balanced Men kept me on a purpose driven path in college, ultimately leading to wonderful years leading as the Student Body President and proudly graduating from Austin Peay State University. I'm thankful that this Brotherhood keeps me connected to life-long friends and has given me the chance to give back in mentoring college men." - Chris Drew